Southsea Castle may be small, but when it was first built it was at the cutting edge of fortifications design. This can best be appreciated from above, in plan view.

The castle was built on the orders of King Henry VIII in 1544. It is often said that it was built “by” Henry VIII, though of course he didn’t get his hands dirty carrying blocks of stone around. But it might surprise you that he designed the layout of Southsea Castle himself and took great interest in progress as it was built.

Southsea Castle as it looked when built in 1544 (painting by Alan Sorrell). You can see the angled bastions coming to a point at the left and right of the image, with a pair of cannons sited where the wall changes direction. These guns were designed to fire along the front of the adjacent wall.

Castles built in earlier centuries typically had high walls and rounded towers. They were designed for an age when the main way to defend a castle was to line the walls with soldiers firing arrows and throwing things at anyone trying to climb them. The higher the wall, the better.

By Henry VIII’s day a new threat had appeared: gunpowder. The attacker could set up cannons at a distance and fire at the walls until they tumbled down. That is why Southsea Castle doesn’t have high walls: it made for a smaller target.

Southsea Castle’s defenders could use the same weapon too. Cannons could be positioned to fire out through gaps in the walls to keep attackers at bay. 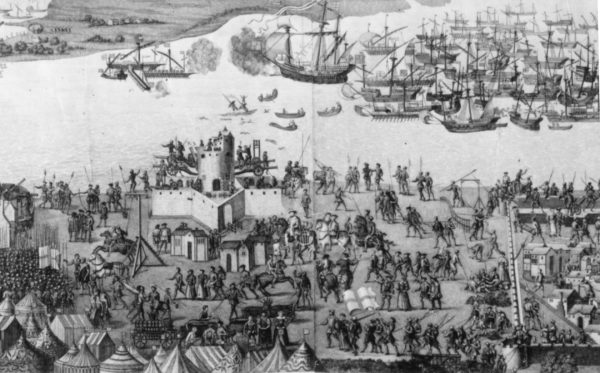 This detail from the ‘Cowdray Engraving’ shows Southsea Castle in 1545 during the French attack in which the Mary Rose sank.

Henry VIII built a series of other fortifications in the few years before Southsea Castle was constructed, starting in 1539. Most of his other castles were circular, with low, round towers bulging out from the centre. This meant there could be guns firing in lots of different directions.

When it came to Southsea, King Henry wanted to experiment with the latest Italian fashions (in fortifications design, that is). The key feature was what was known as an “angled bastion”. Rather than the castle walls having lots of round walls and towers, there was a triangular wall sticking out on the north and south sides of the castle. Round walls had blind spots near the walls that no guns could fire at, but because the angled bastion was triangular, one of the castle’s guns could fire along the whole length of each wall, meaning attackers had nowhere to hide.

The unusual design of Southsea Castle when first built, as seen from above. The special angled bastions are the walls coming to a point at the top and bottom.

This was one of the first use of angled bastions in the UK.

Since 1544, Southsea Castle has been partly redesigned several times. In particular the north wall has been moved further out and expanded to create barracks rooms inside it, while the south wall has been rebuilt with a rounded end rather than coming to a point. Yet the remnants of the shape of the angled bastion can still be seen today. 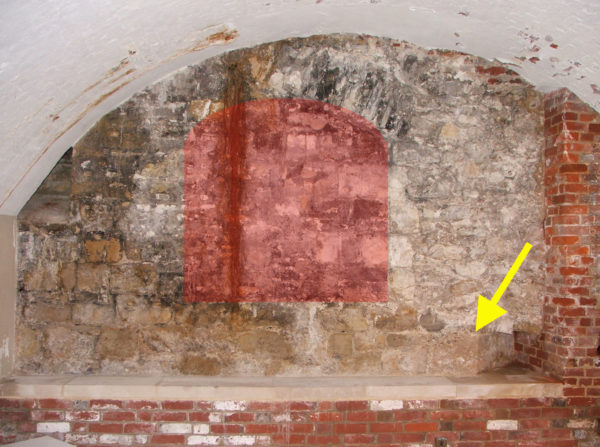 Here you can see the remains of the original 1544 wall inside one of the rooms in the castle. The red area is a gunport that has been filled in. The yellow arrow indicates the point where the wall turned a corner and jutted out into the angled bastion. The cannon at this gunport could fire along the wall of the angled bastion, meaning there were no blind spots where an attacker could shelter.

Over the centuries that followed Southsea Castle’s construction, the concept behind the angled bastion expanded, and was developed into large star-shaped forts – particularly in Italy. These star-shaped designs were known as “trace italienne” meaning Italian outline.